On Monday June 27th, the LIMBO exhibition at VU Views at Vrije Universiteit Amsterdam will be opened to the public. LIMBO is an exhibition created as an accumulation of content made during a workshop series for and by queer/refugee/migrant community organizers & artists. The exhibition is the always evolving result of a creative research collaboration between Framer Framed, Refugee Academy (VU Amsterdam), Alaa Ammar and queer/refugee/migrant community organizers & artists.

In this collaboration, the people involved aimed to co-create meaningful knowledge on the challenges and resilience of queer refugees and the role of community engaged scholarship. For this opening event, Fabian Holle and Noa Bawits will present some preliminary findings of their research projects. There will also be an open mic with spoken word and poetry performances, hosted by Sunni Lamin. The event will finish with a panel in which various co-creators of the LIMBO project will reflect on the LIMBO process.

The event will be moderated by Kay Mars.

The LIMBO workshop series was, and is currently still, situated in the art institution Framer Framed and organized by PhD researcher Fabian Holle (representing Refugee Academy, VU Amsterdam) and co-researcher Noa Bawits who works at Framer Framed and studies a Master in Sociology at the VU. LIMBO consisted of eight consecutive Sundays facilitated by the (queer refugee) community for the (queer refugee) community. The LIMBO project aimed at creating meaningful knowledge on the challenges and resilience of queer refugees and the role of community engaged scholarship as part of the research project Engaged Scholarship and Narratives of Change, led by prof. Halleh Ghorashi.

The workshops entailed: rope play, consent and boundaries by Maha Youssef; story creation by Rochita Loenen-Ruiz; poetry by Sunni Lamin; biographical drawing by Parisa Akbarzadehpoladi; fimo clay by Jerrold Saija; clowning by Mala Badi; and making dolls or objects with fabric and stitching by Sarah Naqvi. In this relatively short period of time, our goal was to build community by creating an environment of care. Our main focus was creating an in-between space in which queer refugees would feel brave enough to share their stories and creativity. A space of mutual support in which they could feel relatively safe and comfortable with the uncomfortable. In line with Aminata Cairo (2021) we argue that “[a]lternative spaces to the larger, dominant narrative give credence to one’s value and humanity. These spaces where existence is resistance, are created out of needs, an answer to an inner calling to be affirmed in this world” (p. 302).

The film RAVE RE111LUTION is a documentary by Alaa Ammar (they/them) portraying members in the LIMBO workshops as well as their connections to other communities and contexts. The six large art works are made by Ariya (he/him) from Iran. The digital art works represent healing journeys into the unconsciousness. They are borderless manifestations of introspection about life, society, the past, the now, and carefully dreaming intentions for the future.

The LIMBO series culminated in a public event on March 27, 2022 at Framer Framed, where some of the works produced during the workshops were presented alongside a programme of live performances. On June 27, 2022, VU VIEWS offers another opportunity to engage with some of the work created throughout the LIMBO workshops. 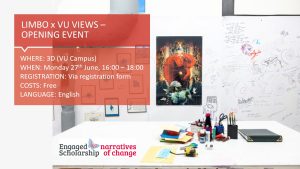